Effective communication is a critical element of incident command in today’s rapidly changing, multi-unit world of emergency response if a successful outcome is to be reached.

Poor incident communications are frequently cited as a significant factor in many of the Fire Fighter Fatality Investigation and Prevention Program reports, commonly known as LODD reports issued by National Institute for Occupational Safety and Health. 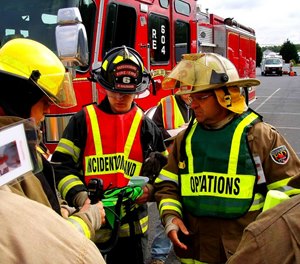 Poor incident communications are frequently cited as a significant factor in many of the Fire Fighter Fatality Investigation and Prevention Program reports, commonly known as LODD reports issued by National Institute for Occupational Safety and Health. (Photo/Flickr)

1. Get out of the front yard

Many fire officers are comfortable with operating outside of the command vehicle or command post because they have high confidence developed from experience. This comfort level can easily be challenged when faced with unexpected fireground conditions such as a structural collapse, rapid-fire growth or a firefighter mayday transmission.

Fire departments should train their command officers to establish a stationary command post and effectively communicate with the command team members. It may be easy for an officer to command a small residential fire from the front yard when everything is going well. However, when critical communications or significant events occur, it’s very easy to miss those communications with all the noise and confusion that occurs on many firegrounds.

2. Make sure you can hear and be heard

First responders typically rely on their ability to communicate with one another via radio communications. It’s critical for the incident commander to use their radio in an environment (e.g., their vehicle or command post) where they can hear well as soon as possible.

Mobile radios should be used by command whenever possible as they provide a stronger signal than portable radios. A typical VHF mobile radio’s power output is 40-50 watts, compared to a portable radio’s 5-8 watt output. An 800/700 MHz mobile radio typically has an output of 20-25 watts, while its portable radio counterpart provides only 3-5 watts of output.

A combination of good foundational training, equipment familiarization, standard operating procedures, common language, benchmarking, practice and an understanding of how to maximize the use of both mobile and portable radios will help set your team up for communications success on any fireground.

Follow these basic recommendations to ensure communications success with your portable radios:

3. Get everyone on the same frequency ASAP

In many communities, it doesn’t take much of an incident to exceed the home department’s staffing capabilities considering career staff reductions and declining numbers of volunteer firefighters. The result is more frequent response of mutual aid resources, which may bring into play communication interoperability issues as well, such as the use of different radio systems and operating frequencies.

In the U.S., the APCO Project 25 has been working with public safety agencies and land mobile radio manufacturers with the goal of improving LMR interoperability through common manufacturing standards.

But communication problems do arise, and the incident commander needs to adjust and correct communication gaps. That can be accomplished by sending members of the IC’s department to the other mutual aid divisions to “buddy up.” For example, a member of the IC’s department with a radio is sent to work with the water supply officer, an ICS position being staffed by an officer from a mutual aid company.

4. Make sure everyone speaks the same language

One of the original and primary purposes of the NIMS Incident Command System was to provide a common set of terminology and functional positions so that anyone working on the emergency scene would be on the same page.

The incident commander is the only “command” on the scene, and others should not refer to themselves with a designation command after a function (e.g., “water command” or “staging command”). This can cause confusion on the fireground, especially when multiple radio transmissions are occurring.

When assigning subordinate ICS positions, incident commanders must ensure that they provide each person with their functional position and radio call sign from NIMS. For example; “Waterford Chief 1 (a mutual aid company) from Command. Take a position on side Charley with your resources and protect exposure Charley. You will be division Charley.”

Taken together, using these four strategies should have a positive influence on your command post communications at your next emergency event.

This article reprinted with permission of FireRescue1.

Batt. Chief Robert Avsec (Ret.) served with the Chesterfield (Va.) Fire & EMS Department for 26 years. He was an instructor for fire, EMS, and hazardous materials courses at the local, state and federal levels, which included more than 10 years with the National Fire Academy. Chief Avsec earned his bachelor’s degree from the University of Cincinnati and his master’s degree in executive fire service leadership from Grand Canyon University. He is a 2001 graduate of the National Fire Academy's EFO Program.