At the Push of a Button: How to Ensure Your Agency’s Radios Remain Constantly Updated

The standard for public safety communications has been and mostly remains the reliable mobile and portable radio, allowing instant and direct contact between field units in a vehicle or on foot and the agency’s communications center. In more recent years, technological progress has brought two-way radio systems into the digital realm, permitting advancements in radio technology that have made the trusty handheld into a multitasking tool of increasing capability.

These advances necessarily make the systems somewhat more complicated, especially when switching from an analog system to a digital radio network, which in turn calls for higher standards of maintenance. But as we are seeing emergency services radio systems depending more and more on digital technology, much of that routine maintenance can conceivably be done automatically by the system itself, using a method called push technology. In modern parlance, push technology refers to an Internet server-based system in which the web server itself, in this example, initiates the activation of a preventative maintenance procedure. 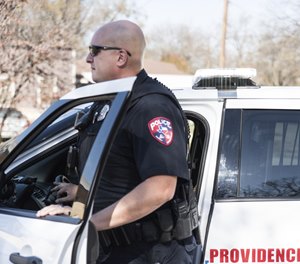 Technological progress has brought two-way radio systems into the digital realm, permitting advancements in radio technology that have made the trusty handheld into a multitasking tool of increasing capability. (Photo/PoliceOne)

The radio system server pushes the process or initiates the system wellness check, rather than the end user (the client) having to request that the process or upgrade be started (that’s called pull technology). It’s similar to how an emergency alert message is automatically routed out to community recipients to warn of, say, an AMBER alert or a dangerous weather warning sent out to the general public, or a SWAT or hazmat team alert sent out to designated team members in the event of a call-out. The agency’s emergency notification system is pushed out to its recipients by the system rather than the recipient having to request (pull) the latest alert update from the system.

From a futures perspective, here are some ways push technology could be used to increase the life of your radios and the effectiveness of your communications:

The desired maintenance activation can be programmed into the network to automatically initiate a notification or process (such as starting a maintenance check or a designated reprogramming of radios), or it can be initiated by a system manager who presses a specific START key on the program, which initiates the process manually. But the process itself, however instigated, is automatic after that point. The system connects to the network components and runs a preventative maintenance program on them and produces a report of its findings, allowing radio technicians to focus on mechanical repairs and writing reprogramming instructions, which the system could then carry out. Some maintenance processes, such as managing battery charging and re-installation, reprogramming instructions, and the like, will still require the work of the radio technicians; only the server-based digital radio network functionality would be subject to the push process.

Because the radio network and its components are being monitored regularly by the system server, you will likely know in advance when the system approaches insufficiency and needs to be serviced or even upgraded. The data provided by the radio’s automated maintenance server should provide clues as to the health of your radio system.

For the same reasons, by knowing in advance the overall health of your radio network, problems can be anticipated ahead of time and avoid sudden crashes of the network or a component thereof. Since evaluation and preventative maintenance of the network is being done automatically and continuously, potential problems can be caught, diagnosed, and treated early.

Randall D. Larson retired after 20 years in public safety communications, serving as a shift supervisor, trainer and field communications supervisor for the San Jose (Calif.) Fire Department. Larson was also the editor of 9-1-1 Magazine from 1995 to 2009 and its online version from 2009 to 2018. He currently resides among the northern California Redwoods writing in a number of fields of interest.