Continuing the Guardian Mindset: The Three Pillars of “First Prevention” 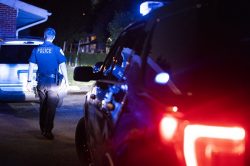 It was 3:30 am when Eric began to explore and pick through the garbage outside the mountain area where he was camping. He found over the last five years the obscurity of the darkness was best for him to sift through other’s garbage. At that time of the morning, he would have things all to himself when most are asleep. Eric was well-known so he preferred desolate areas in the wee hours of the morning, so as not to attract any attention. But on this morning in 2003, what he didn’t count on was the keenness of a rookie police officer out on patrol.

When Officer Jeff Postell of Murphy, North Carolina, happened upon the infamous Eric Rudolph, one of America’s Most Wanted criminals linked to bombings of abortion clinics and the 1996 Olympics, it was not a chance encounter. Officer Postell recognized that patrol officers can greatly impact public safety by their mere presence on patrol. That’s why, when the dust cleared on Rudolph’s historic capture, Officer Postell matter-of-factly remarked that it was “all in a day’s work.” Postell saw himself as a first preventer, knowing his day-to-day practices could make a difference.

Today’s guardian policing mindset, which emphasizes community partnerships and positive community contacts, is rooted in the history of the night watchmen that patrolled city streets in the 17th century and sounded the alarm if trouble arose. In doing so, the bellmen, as they were often referred to, were an important component of a safe community. These community guardians were history’s first preventers and, no different than today, they had the greatest likelihood of crossing the timeline of a criminal or terrorist.

Over the years, patrol officers have been grouped into the alias description of first responders with their other public safety counterparts. While it’s important to understand who will be first to arrive at the scene of a crisis, this designation can also marginalize the value of public safety officials when it comes to preventing disorder and crisis. History has demonstrated that public safety officers exercising a proactive mindset and leveraging available technologies can make communities safer.

So how do public safety organizations develop first preventers? The answer may very well rely on cultivating an environment of leadership, ownership, and understanding.

Developing first preventers within a public safety organization demands the vision and sustenance of command leadership. Executive level commanders must develop and advance patrol practices underscored by sound policies, procedures, and training. Additionally, commanders must recognize, understand, and apply available technologies that can assist their communities in identifying, preventing, and responding to both crime and emergencies.

To own something means to have made something part of ourselves. In the context of public safety, ownership is something that must be shared or held jointly with the public we serve. Robert Kennedy said it best, “Every society gets the kind of criminal it deserves. What is equally true is that every community gets the kind of law enforcement it insists on.”

In order for a public safety organization to have ownership over a philosophy they must first ensure that expectations are described, understood, and achieved. This comes in the form of policies, procedures, and most of all, the evaluation of practices. Second, and just as crucial, is the development of a culture within an organization that intrinsically offers its personnel a true sense of calling. A personal sense of vision and mission can act as a self-regulator for those on patrol. Adopting a guardian philosophy centered on prevention can be much more effective and sustained when officers truly have their hearts in it.

To be effective and efficient at the most fundamental level, public safety organizations must develop a vision, establish sound policies, advance strategies, and then evaluate their practices (over and over again). However, the glue that aligns these elements will always be training. Establishing a preventive mindset culture within a public safety organization is wedded both directly and indirectly to training. When patrol officers understand what prevention is, they can recognize and foster creative means for advancing it within the areas they serve.

Eric Rudolph was brought to justice because a sharp patrol officer familiar with his beat knew when something was out of place. That encounter exemplifies the value that public safety professionals – by advancing the guardian mindset and knowing their communities – can have on the safety and security of those they are sworn to protect and serve. Yet it is not enough to roll the dice and hope patrol officers apply the guardian mindset to their day-to-day public safety efforts. It is essential that agencies, by leveraging their people, their practices, and their available technologies, establish and advance first preventer cultures within their organizations. Through the pillars of leadership, ownership, and understanding, executive commanders can develop the values and principles necessary for implementing a culture of prevention.

Learn more about how your agency can apply a Guardian Mindset in 2020.