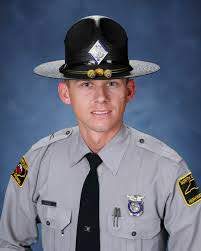 One of the finalists to highlight, from the IACP State and Provincial Police Southern Region, is Trooper Daniel Harrell of the North Carolina State Highway Patrol. Read and watch his courageous story below, which exemplifies why he was the Southern Region finalist for the 2019 Trooper of the Year Award.

On Monday January 14, 2019, at approximately 5:21 p.m., Trooper Daniel Harrell, a five-year veteran of the North Carolina State Highway Patrol, was patrolling his assigned area of Wilson County. As Trooper Harrell was finishing a traffic stop, he observed a vehicle traveling north bound on US301 improperly towing another vehicle. Trooper Harrell conducted a traffic stop, made contact with the driver and passenger, and informed the driver of the infraction. Both the driver and passenger were unable to produce their licenses or identification and drove off in an attempt to escape Trooper Harrell.

A short chase ensued, then the driver pulled over. As Trooper Harrell was preparing to exit his patrol car, the driver leaned out of his vehicle and opened fire. The suspect fired approximately four shots, striking Trooper Harrell twice in the face. Trooper Harrell was able to immediately return fire and continued to stay engaged while providing vital information to the communications center.

Despite overwhelming adversity, Trooper Harrell showed bravery and dedication to public safety. Motorola Solutions thanks and congratulates Trooper Harrell for his dedication, service and being a finalist for the 2019 Trooper of the Year Award.