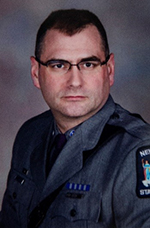 One of the finalists to highlight, from the IACP State and Provincial Police North Atlantic Region, is Trooper Timothy Conklin New York State Police. Read and watch his courageous story below, which exemplifies why he was the North Atlantic Region finalist for the 2019 Trooper of the Year Award.

On January 28, 2019, Trooper Timothy Conklin learned of a stolen vehicle traveling in the area he was patrolling.  He positioned his patrol vehicle in a U-turn on State Route 17 to watch for the suspect vehicle. Within minutes, Trooper Conklin saw a vehicle matching the description traveling westbound on State Route 17.

Trooper Conklin pulled out behind the suspect vehicle, and the operator sped up and then crossed the median over to the eastbound lanes. Trooper Conklin traveled to the next U-turn and caught up with the suspect’s vehicle. While crossing the median, the vehicle suffered major damage and became disabled on the side of the roadway.

The suspect then made a flanking movement from the driver side of the patrol vehicle, firing a round into the ballistic panel of the door. Trooper Conklin was able to exit the vehicle and resume firing at the suspect. The suspect was fatally struck in his torso, ending the attack. The subsequent investigation revealed the suspect was the subject of several criminal investigations, was in violation of his probation, and was expecting to be incarcerated.

Trooper Conklin’s calm demeanor and decisive response to an imminent threat on his life saved him and prevented a violent suspect from harming others. Motorola Solutions thanks and congratulates Trooper Conklin for his dedication, service and being a finalist for the 2019 Trooper of the Year Award.