Body Cameras for Smaller Agencies: My Experience in Law Enforcement

Joe Brady is a proud Motorolan and veteran officer. Here, he gives unique insight into the challenges facing smaller agencies and how the VB400 body-worn camera can help.

Joe, you were in law enforcement for 18 years. Can you tell us how it all started?

My first job was in Darien, a little town just outside of Chicago. That was a lot of fun, because there were only 10 of us, so we really did have an “end-to-end” experience when it came to serving our community – we had to write tickets, respond to calls, process evidence… I even had to wrangle a rabid raccoon once, which was definitely more exciting than my usual paperwork!

Wow – did you expect to be getting so acquainted with the local wildlife when you applied?

No, definitely not. I grew up on the Southside of Chicago, so working in a rural town was definitely a learning curve. I once had to call for backup getting an escaped bull off the road – I’d never seen one in real life before, so I called it a “cow with horns” over the radio. They didn’t let me live that down for a while. 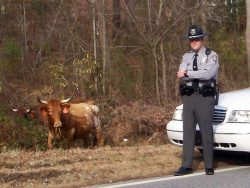 The cow with horns in question.

You transferred to Chicago PD after 5 years in Darien – that must’ve been a big culture shock.

Well, yes and no. Wherever you go, every police department has the same problems – they’re just trying to solve them in different ways. Too many cases, not enough budget, staffing problems… you get the idea. It was amazing, though – working in a big agency meant I could advance my career even more quickly.

You were still with Chicago when they started trialing body-worn cameras, right?

That’s right – I remember the early days of trying to check out a camera using the PC and then having to reset your password because you’d forgotten it in the craziness of shift changeovers. And once you got a camera, it sometimes had a low battery or no storage. I wish we had had touch assign when I was still in policing; it would’ve been so convenient to get a camera just by tapping my ID card.

How did the officers feel about body-worn cameras back then?

I think there was originally some resistance, but it became clear pretty quickly just how valuable they were in showing the full context of a confrontation. And the technology is just getting better; the fact that the VB400 integrates with the rest of the Motorola Solutions ecosystem – including Avigilon Control Center and soon APX radios – means command staff can have eyes on the scene in real time and cameras can be activated without even touching them.

So, what did you do after Chicago PD?

After 10 years there, I relocated to Clayton, North Carolina. It was bigger than Darien, but not by much; there were only 14 of us in total! 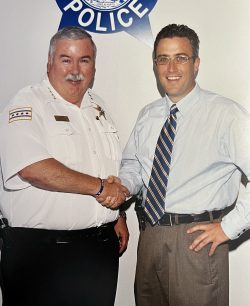 Superintendent Phil Cline and me on my last day at Chicago PD.

Was it nice to be back in a tight-knit squad?

Definitely. The team was really excited to meet me because they’d heard I was from the big city, but they found out pretty quickly I’m very mild-mannered and meek. I did end up taking them to Chicago though, so they could see all of my old haunts – they even sat down with the Superintendent and talked shop for an hour. See what I mean about all departments having the same challenges?

Speaking of challenges – what was it like working at a small agency before digital evidence was so ubiquitous?

I’ll be honest: it was a complete nightmare. The workflow took hours; we had to physically track evidence down and collect it from all kinds of sources. Collecting video from fixed video cameras was especially frustrating because we had to manually transfer this grainy, low-quality footage to a VHS tape and seal it in a bag, only for it to sit in the evidence room and gather dust for months.

That must’ve been very time-consuming.

Oh, absolutely. It was a real waste of resources – and when you’re a small agency, you’re so stretched thin already. It was particularly difficult to collaborate with other small agencies; if one of them came to us and asked to review CCTV footage as part of their case, we’d have to fill out a report and courier the tape to them. We’d also have to sit with them while they watched the tape – no copies allowed – which took ages.

That’s why I was so interested when I first learned about our backend body-worn camera management software, VideoManager EX – the idea of securely sharing video evidence quickly and easily with prosecutors and other agencies in just a few clicks was really exciting to me.

Coming back to body-worn cameras – what do you think makes the “ideal” camera for smaller agencies?

I think ease of use is right up there. As officers, we already have so many tools at our disposal – firearms, batons, radios, hundreds of hours of training – that even one new piece of technology can feel overwhelming. When I first picked up one of our VB400s, I was immediately impressed by how intuitive it was to use – you’ve got that big friendly front button, but you can obviously customize its buttons to suit however you work best.

When I say usability, I’m also thinking about the IT folks at these agencies – if they even exist! Like I said, I had to wear lots of “technical” hats at Darien and Clayton – which was great, because I’m a nerd at heart. But for agencies without a resident geek, the solution has to be as easy to use as possible; I love the fact that you can install VideoManager EX on-premises in about ten minutes. And of course, there’s also that cloud option, if you want us to manage software upgrades for you.

Officers at smaller agencies also have more freedom than those at larger ones, in a way – we were allowed to take our radios and even cars home with us! Motorola Solutions offers VB400 solo docking stations and adaptor cables for at-home charging so take-home privileges can extend to body-worn cameras, too.

Do you think small agencies are sometimes wary of investing in body-worn cameras due to high upfront costs?

Absolutely. Budget is always an issue with technology because it’s a revolving door – you know, you can use the same pistol for your entire career, but body-worn cameras are evolving so quickly that it’s hard to know where you’ll be in five years.

How much do police body cameras cost?

It really depends. Our VB400-as-a-service offering means that you only need to pay $29 a month per camera, with guaranteed hardware refreshes along the way, but that’s rare; most body-worn cameras are a lot more expensive than that!

Joe, thanks so much for your time today. Anything else you’d like to say?

It’s been a pleasure – and if anyone needs tips about getting a “cow with horns” out of the road, I’m always happy to lend a hand.

Learn more about our body-worn cameras. 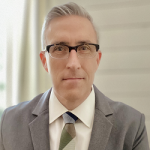 Joe Brady is a veteran of the Chicago Police Department and leads Enterprise Sales in North America, for Motorola Solutions body-worn and in-car video solutions.