National Police Week 2020: In Valor there is Hope 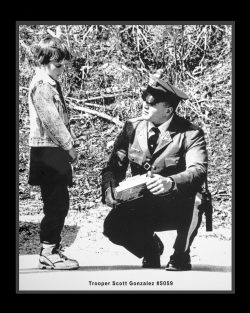 His eyes were wide open, and his attention focused on all the sights and sounds around him. The pipes and bugles, the horses and cycles, and the color guards and flags coalesced to forever etch in his mind that policing is something so much bigger than anyone and is filled with esprit de corp. Ever since my classmate and friend, Trooper Scott Gonzalez (pictured) of the New Jersey State Police lost his life in a gun battle, I had been blessed to attend this service many times over the years, but this night was different. Just a few weeks before retiring I took my 9-year-old son with me to the Candlelight Vigil during National Police Week.

As I watched him take it all in among thousands of attendees under the glow of candlelight, I was immediately impacted by the powerful messages that Police Week offers us all. It gives us pause to honor those that have paid the ultimate sacrifice. It reminds us that because of the selfless and noble acts of the police profession we all have great things to hope for our children and grandchildren including peace, justice for all, and the end to hate and domestic violence. It highlights the sacrifice of those on the front lines every day that create the safe environment needed to restore blighted neighborhoods and enable communities and businesses to thrive on. Lastly, it forces us to strive for the day when no public servants will be cut down in their prime and taken from their families much too soon.

One cannot experience Police Week without coming away with a greater appreciation and admiration for those brothers and sisters in arms that have chosen a career bigger than themselves where their lives are at risk daily protecting our freedoms. Reminding us all of the weight of sacrifice is the etched quote on the memorial by Tacitus that reads “In valor there is hope.” While these words underscore the contribution that our fallen heroes have made in the name of freedom throughout our nation’s history, they also illuminate the value that our law enforcement officers provide for us daily in the face of evil. Even today, where the looming threat is historically different, it is the police on the frontlines that we look to provide a blanket of security as we navigate this new norm.

To date, the National Law Enforcement Officers Memorial contains nearly 22,000 names of officers who were killed in the line of duty. The manner in which they were killed runs the gamut from shootings to car crashes, from terrorist attacks to cancers contracted during rescue and recovery operations. When you absorb yourself in the stories of those heroes lost, you find one common theme: whatever challenges our great nation has faced in its history, there were law enforcement officers who paid the ultimate sacrifice because they were the only ones standing between good and evil at the time. We will add 307 names of fallen who will be recognized and engraved on the wall this year. Next year, the memorial will undoubtedly contain the names of officers who contracted the COVID-19 virus while carrying out their duties.

National Police Week is a time to remember the fallen and a time to highlight the police profession. Throughout its history, Police Week has heard from sitting Presidents and other dignitaries who have all espoused the importance of a professional police force in advancing and underpinning the ideals and values of a democratic society. This year, Police Week will continue; however, there will be no mass gatherings of survivor families, those who serve or have served, and those just there to pay their respects. Instead it will be done primarily in the virtual domain.

So, in a few days, I will again experience the magic of Police Week with my son. Yet, this year, I will have to rely on photos from ceremonies attended in years past, writings and videos from Craig Floyd, the Founding President of the National Law Enforcement Memorial, and my own experiences. I want to paint a picture for him that continues to express the powerful effect of selflessness, service, and sacrifice – all that the law enforcement profession personifies for society. I will also rely on the words of others who will be describing National Police Week in the days that come to further exemplify how the solidarity gained from this national event positively impacts a profession that is so often caught in the middle of crises that fall upon this great nation. 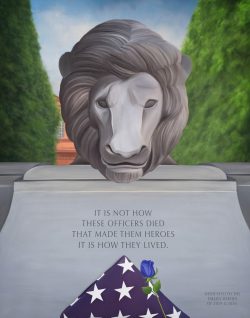 Lastly, I will highlight the painting that artist, Officer Jonny Castro of the Philadelphia Police Department has drawn to symbolize this year’s National Police Week. Jonny Castro is a sworn Philadelphia Police Officer and the forensic composite artist for his department. In his free time, Officer Castro paints portraits of heroes killed in the line duty and donates prints to their families. To date, he has painted over 600 portraits of those who made the ultimate sacrifice. Officer Castro has dedicated a portrait for Police Week 2020 that encompasses the wall of the fallen and reminds the families and friends of those who have passed, that their loved ones will never be forgotten.  Solemnly showcasing the memorial wall, the lion protecting their honor forever, and the words “It Is Not How These Officers Died That Made Them Heroes It Is How They Lived” etched in stone. It is images like this that help us remember those who have paid the ultimate sacrifice. Even though we are not able to be at the memorial in person, Officer Castro offers us a picture for our mind’s eye of what this annual event represents regardless of whether we are able to be there physically. I have included the portrait officer Castro created for National Police Week 2020 (pictured). When I view this artwork it brings me right back to Tpr. Scott Gonzalez. While he died a hero – and will always be honored for the courage under fire he demonstrated – it was how he conducted himself in life that continues to inspire me decades later. I could never thank Officer Castro enough, and those like him behind the scenes for their unwavering support to commemorate our heroes year after year.

We come from everywhere to remember, honor and pay our respects to the fallen and their survivors. Among us are loved ones left behind, rookies and seasoned veterans, the public at large – and yes – a child navigating his or her future. The ceremonies stir our emotions into a conflicting fusion of emptiness and enormous pride. The impact is powerfully persuasive that good can and must triumph over evil. By recognizing the ultimate sacrifices made by the men and women that serve in our nation’s law enforcement community, we are filled with optimism and confidence as we embrace the challenges that tomorrow will bring. Police Week celebrates the valor of a few while fostering hope for the many. Ergo – In valor there is hope.

NOTE:  President John F. Kennedy, in 1962, designated May 15 as Peace Officers Memorial Day and the week in which that date falls as Police Week. In 1984, U.S. Rep. Mario Biaggi of New York, and one of the most decorated police officers in New York City history, formed the Memorial Fund and his legislation built the National Law Enforcement Officers Memorial that was dedicated in 1991. In the decades that followed, Police Week has grown to include an annual Blue Mass, a Candlelight Vigil, a Wreath Laying Ceremony, the National Police Survivors Conference, an Honor Guard Competition, the Emerald Society & Pipe Band March and Service, and the final destination for the Police Unity Tour, which every year raises significant dollars in support of the National Law Enforcement Officers Memorial and National Law Enforcement Museum. Incredibly, in 2019, a group of three kayakers completed their inaugural journey from New Jersey to Washington, D.C., to arrive in time for Police Week. The annual event is an incredible experience and draws anywhere between 25,000 to 40,000 law enforcement officers, their families, and other visitors.