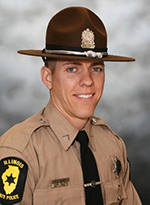 One of the finalists to highlight, from the IACP State and Provincial Police North Central Region, is Trooper Kyle Seger Illinois State Police. Read and watch his courageous story below, which exemplifies why he was the North Central Region finalist for the 2019 Trooper of the Year Award.

On March 16, 2019 at 3:45 p.m., a suspect committed a robbery at the Sam’s Club in Glen Carbon, Illinois. After fleeing the scene, the suspect pulled a handgun and fired at a good Samaritan attempting to stop him. The suspect attempted to carjack someone in the parking lot of PetSmart, however was unsuccessful. The suspect then approached another vehicle on foot to attempt another carjacking. The suspect was successful in carjacking the second vehicle and fled from the scene.

Trooper Seger utilized his training and put his own life at risk in order to protect the public from an extremely dangerous and potentially deadly individual.  Motorola Solutions thanks and congratulates Trooper Seger for his dedication, service and being a finalist for the 2019 Trooper of the Year Award.