Being There When They Need You the Most 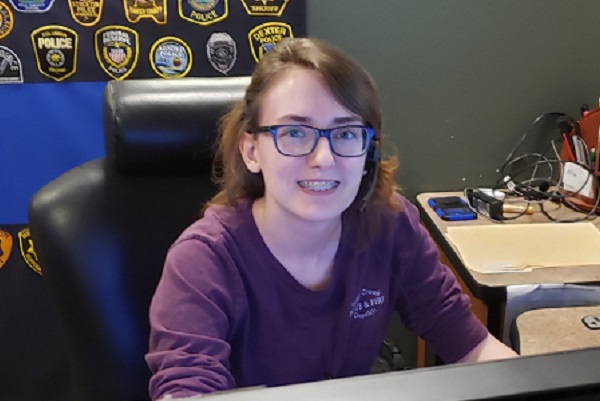 Elisabeth Riley says she “lucked out” when she got the job of Dispatcher and 9-1-1 Operator with the Sugar Creek Police and Fire Department in Missouri. The agency is part of the Mid-America Regional Council, which serves 119 cities in nine counties in the Kansas City metropolitan area. Elisabeth, who refers to herself as a “military kid” and has lived all over the U.S., had just moved to Kansas City. Her aunt, who lives in Sugar Creek, told her about the open position. She’s been doing the job for 15 months now and for her, it’s a great fit.

“Some people, when they are hired, just can’t do it. Not everyone has the ability to do what we do and not break down or fall apart. You have to keep calm because you are the one there to help people when they most need it; you are the lifeline in one of the worst times of their lives.” And in Elisabeth’s time on the job, she’s seen people through some truly bad times.

She recalls one of the most challenging calls she’s taken. It was regarding child abuse. “A kid called – it was the sister, and she was so upset. Then I spoke to her brother and could hear the sister in the background crying. I dispatched both fire and police officers and stayed on the phone until the officers arrived. The mom was outside yelling at the father, and then the mom started yelling at the kids, saying they shouldn’t have called. But the kids stayed on the phone, and I continued to ask them questions about what was happening. I told them officers were en route and that help was on the way. I got as much of a description of the father as possible because I needed to make sure my officers would be safe when they arrived. I tried to calm the kids down as much as possible but sometimes, in a situation like that, it’s very hard.”

This call was very personal for Elisabeth, being the oldest sister of six kids. “If my siblings were crying, it would be difficult for me.” So, to reset and be ready for the next call in situations like these, she says, “I take a deep breath and remind myself I did what I could to help them.” But, she says, she looks for opportunities to improve, too. “I ask myself, ‘what could I have done better?’ Then, I move on to what’s next.”

Elisabeth is proud of how quickly she has adapted to her job, the responsibilities and to something very important to her – making sure the officers are safe when they arrive on-scene. “We’re a small agency, and we all know each other. I get to interact with the officers and after a bad call, we check up on each other. And that makes such a difference.”

These kinds of interactions are much like she has with her siblings, for whom she proudly stands by. “They can come to me when they need something, and I’m there for them. Like when my brother was little and bullied in school and decided to skip school because he didn’t want to face it. But I said he had to talk about it and tell me what was going on. Family is important, and I’m grateful I’ve built that kind of relationship with my brothers and sisters.”

Yet, at her core, Elisabeth has a desire to help anyone in need. She says, “Helping or saving a person is just a good thing to do as a human being.” And being able to do that every day, to be there, no matter the situation, for Elisabeth, is what matters most.