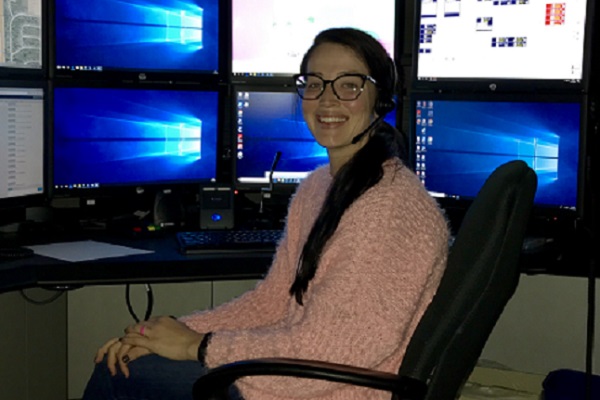 When Kendal Fritz graduated college, she had no plans for what she’d do next, but there was one thing she did have – a dream to help people. At the time, her younger brother was going to school to be a firefighter and suggested she become a dispatcher. Kendal says, “At first, I kind of brushed it off. I didn’t know if I could handle that.” Then, just a few months later, she saw a notice that the Miami County Communications Center was hiring and decided to look into the opportunity. “From the first time I set foot into that dispatch room, I knew there were tons of people that needed my help.” Her career as a telecommunicator began eight years ago on that day.

Today, she still fills the same position for Miami County, Ohio, which dispatches for over 20 public safety agencies and is where Kendal’s hometown is located. This latter fact is one of the biggest rewards of her work. “Not only do I get to help people, I get to help people in the community where I was raised, the place I love. That’s what I love most about this job, giving back to a community that has given me so much.” But, she tells, it’s not without its challenges.

One of Kendal’s most difficult 9-1-1 calls happened shortly after her last return from maternity leave. “I had just sat down for the day and got logged in when I received a call. It was one of those calls you knew, before you said anything, was going to be bad. It was a young mother, who was screaming and crying that she’d just found her baby girl blue and not breathing. We did CPR together as I listened to that mother and felt all of her pain. When the ambulance and police arrived, I slowly hung up, and my supervisor asked me if I was ok. All I could do was cry. I felt so bad for the mother and so guilty that my daughter was at home and well.” She adds, “That mom will never know that behind that call was another mom who thinks about her all the time and will never forget her 9-1-1 call that day.”

Kendal shares that she’s extremely critical of herself, her “own biggest critic.” Yet, she does allow herself to celebrate the positive moments and has set milestones for her work. She explains, “After I made it out of training and had been dispatching a while, I decided to make myself a bucket list of things I wanted to achieve as a telecommunicator. While the list has changed throughout the years, one thing has always been on it. That is to feel like I truly helped save a life.” Kendal has finally let herself put a check next to that box on her list, though it’s one goal she’ll never take off.

“I received a call from a father with an infant not breathing. I encouraged him to start CPR and assisted him with instructions until the ambulance arrived. From all the information I have been told, that baby made it. Knowing that I helped start the path that led to that baby’s recovery is really what makes this job amazing. Nothing feels better than knowing you did your part, no matter how big or small.”