One of the Most Rewarding Moments of My Life 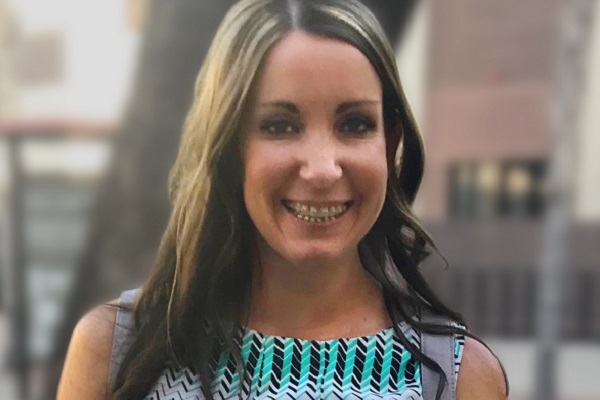 Katie Layne, a Fire Emergency Dispatcher, just received her agency’s highest honor – the Megan V. Lange Dispatcher Award. This is given annually by the Phoenix Fire Department in memoriam of a dispatcher who did her job with perfection and empathy. Of the commendation, Katie says, “I was shocked. I didn’t expect it at all. A lot of great people work here and do a great job every day.”

Katie’s response attests to her humility and unassuming demeanor that shines through in how she carries out her duties and supports her colleagues. “I guess I make a difference, but I don’t spend time thinking about it. I just do my job because that is what I’m supposed to do. I give 100% and do the best I can every day.”

For Katie, doing her best means several things. “It’s important to me to always be on time, to try my hardest every day. I respect the position I hold.” But, above all, it’s helping people and being there when they need you. “The person on the other end is important to me every call, and I often think, ‘what if I was the one making the call – how would I want to be treated?’.”

Katie manages an average of 40-50 calls per day, but her presence isn’t just felt on these calls. Her co-workers feel it as well, and her supervisor says they view Katie as a leader and someone they can trust and on whom they can depend. “I know I hold everyone to a high standard because I want them to do the best they can. We work a tough job, and we have to know we can count on each other. I want to know I can count on my coworkers and them the same with me. When someone does something that’s not right, I try to correct them to help them do better. Things are always changing here, and you have to keep up. I try to stay educated and trained, so I know what I am doing at all times.”

Katie was born and raised in Phoenix. When her brother suggested she take the test for dispatching, she’d never considered it until that moment. “But I thought I would do a good job, and that was eleven-and-a-half years ago. I’ve learned this is definitely a calling,” says Katie. “Not everyone can do it.”

Katie recalls one of her most challenging calls, which happened early on in her career. “I was pretty new, and it was for a child drowning. The call came from a lady whose English wasn’t great, and she had just found her two-year-old in the pool. It was scary. It was my first drowning. There was a language barrier, and the mother was crying and screaming. After the call, I was shaking. I had to step out for a couple of minutes. I found out in the news later that the child didn’t make it. Closure is not part of this job.”

To manage the constant stress, Katie has several outlets. “I work out at least once a day and spend a lot of time with my nieces and nephews. And when possible, I hang out with my friends.” She adds, “I’ve made some good friends here at work. We all know what the other deals with, so being together helps a lot.”

In addition, Katie says attending church every Sunday has become increasingly important. “When I started going, I noticed a difference. This is a tough job, and you can’t get emotionally involved. When you take 9-1-1 calls back to back, you may have an easy few calls and then you get a call that’s not good. Church is like my reset button for the week. It gives me peace.” She also finds peace in the positive endings.

Last year, Katie got a call from the husband of a woman who had stopped breathing. Katie talked the husband through how to administer CPR. When the fire crews arrived, they had to bring the woman back five times. They kept losing her, but when she got to the hospital, the doctors were able to save her. A few months later, Katie met the husband and wife. “They were so kind and so grateful.” And, it turned out, she and the woman who survived are alumni of the same Phoenix high school, and her husband’s brother is a Captain for Phoenix Fire, whose firefighters and field units she communicates with often while providing dispatch services via the radio system.

“We have more losses than saves, for sure, so actually meeting someone I helped – well, it was one of the most rewarding moments of my life. In the end,” says Katie, “I do love what I do.”