Paying It Backward: Honoring The Police Through Those We Serve 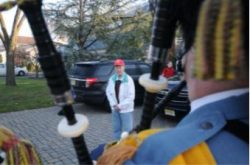 It had only been twenty-minutes when I heard the door open. I knew something was wrong, since she told me she was headed to the gym. When I met her in the kitchen, she had tears in her eyes. “Mr. Rose died,” she exclaimed. That was all she needed to say. She had learned from the new neighbors of his passing. You see Mr. Rose had moved out of the area about a month before the COVID crisis, so staying in touch with him or his sons became just another casualty of this pandemic. But who was Mr. Rose, you say?  Seymour “Cye” Rose, was 95 years old when he passed. He was my neighbor for the past twenty years. More importantly, he enlisted in the Marine Corps at age 17, and served proudly as a corporal during World War II fighting in the Pacific as a member of the Greatest Generation.

To put a finer point on it, Mr. Rose is just another reason that underscores why we all serve in law enforcement. While he may have paid it forward in service for this great country 80 years ago, I cannot think of another more poignant reason for those in the blue and brown to “pay it backward” in honor of those great Americans like him.

Every year in December, a contingent of Jersey troopers head to the United States Military Academy at West Point, New York, to honor Colonel H. Norman Schwarzkopf, the first Superintendent of the New Jersey State Police. Schwarzkopf, a graduate of West Point, ensured that so much of the “Honor, Duty, Country” ethos made it into his fledgling organization, which by the way turns 100 this year. I had the privilege of leading that contingent of troopers on that annual trek for several years. On one particular year, we started with breakfast at my house. Anytime a contingent of troopers shows up somewhere people notice, and when you throw in the bagpipes, people come running from all over. On this day, my neighbor Cye came out to visit, donning his Marine Corp baseball hat. He stood in awe at the sight of the troopers, and when each trooper, regardless of their rank, came up to thank him for his service you could see his eyes well up. I would bet that he was thinking that his sacrifices in the Pacific directly led to what he was proudly seeing before him: a band of brothers and sisters – police officers – whose mission it is to preserve the peace and help maintain liberty and justice for all.

This week is National Law Enforcement week. It is a time when we reflect on the profession and pay tribute to those that have paid the ultimate sacrifice. To date, the National Law Enforcement Officers Memorial contains over 22,200 names of law enforcement officers who were killed in the line of duty. This past year, according to the Law Enforcement Memorial Fund, 264 police officers were killed in the line of duty, representing a 96% increase compared to 2019. While shootings, vehicle assaults and other traffic related fatalities continue to take law enforcement lives annually, this past year COVID-19 was responsible for a significant amount of heroes’ lives lost.

National Police Week continues to be a time to remember the fallen and a time to honor America’s Law Enforcement who protect and serve our communities. It is a harmonious relationship when the police and communities work together to help keep communities safe. There are so many that rely on the police profession to bring justice to the victims of violent crimes, resolution to their families, and restore peace to the community. The reason that we get into this profession is to serve the communities that we love and to keep them safe and protected.

During this Police Week you can feel proud and confident that so many citizens of this great country absolutely rely upon your selfless service every day. So many are able to safely live and work in their communities because of the day-to-day sacrifices that the police profession makes on their behalf. So many recognize that the heroes we add to the memorial wall this year did not die in vain.

To all out there serving in law enforcement, we salute you this National Police Week, and if Mr. Rose was with me today, he would thank you too – for paying it backward.