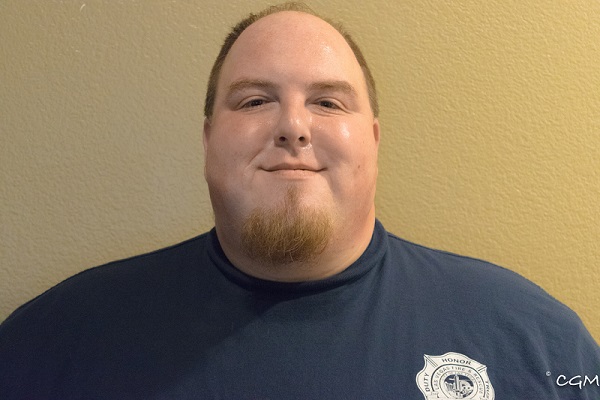 There’s never been anyone more grateful for a speeding ticket than Matt Grogan. After all, it was how Matt got his start in public safety. He was just out of college, living in Chicago and trying to figure out what to do with his life, when one day he went to the county courthouse to pay that speeding ticket. There, he saw a job posting for a telecommunicator position with the local office of emergency management. He didn’t know what the position entailed, but it seemed interesting. Today, 14 years later, Matt serves as Communications Specialist with the Center of Las Vegas Fire and Rescue, a career for which he says, “Thank goodness for that speeding ticket.”

Matt transferred to Las Vegas from Illinois three years ago, looking for a different challenge, which has certainly proven to be so. His most profound experience was the tragic shooting in 2017 at the Route 91 Harvest music festival, where 58 people were killed and 851 injured. He wasn’t on duty at the time, but when he saw what was happening and that he could be needed, he went in 45 minutes after the shooting took place. It’s still with him today. He learned early on that it’s okay to hold onto the memories – as long as you don’t let them fester.

“We have a duty to be ready for the next call we take. We owe it to the citizens we serve, and that’s what they expect.” However, he acknowledges that dealing with the emotional aftermath is difficult. “You have to encourage people to talk about it and recognize you may not be OK, and that’s OK – but you can’t hold it in.” He often refers to the quote from Winston Churchill, adapted to fit the telecommunicator’s situation. “If you are going through hell, keep going and don’t linger in it.”

Matt takes solace in knowing the impact he can make for 9-1-1 callers. “Whether we are saving a life, helping someone get the medical attention they need or mitigating a police matter, it’s helping people that matters and making sure the people we dispatch are safe and that we get them to the right place and keep them safe.”

One instance Matt recalls vividly happened a month before he moved to Las Vegas. “I took a call from a lady who heard someone breaking into her house. She was divorced, soft spoken, and I could hear someone trying to kick her door in. I dispatched officers and stayed on the phone with her. I told her to hide in the bathroom and lock the door. When the officers arrived, they confronted the guy, and she stepped outside of the bathroom. I could hear the gunshots in the phone and was saying to her, ‘Monica, go back to the bathroom, you’re not safe yet.’ The next day I got her again on a call. She heard another noise outside and was scared. When the officer brought her in, I met her, and it’s the only time I have ever met someone I spoke to on a call. It was almost surreal. We jump in and out of people lives and never expect to hear from them again, much less see them again. Monica was exactly as I had pictured her. We had shared a moment, and I will never forget that.”

Matt makes a great point about the lack of visibility telecommunicators have in the public eye. And, it’s something he’s been working to change.

After the Harvest festival shooting, the center received so many gifts and cards from people all over the country that Matt and his co-workers decided to start a Facebook page as a way to say thank you. Every day, for 30 days, they posted pictures of the gifts. Then, Matt repurposed the page to stay in touch with its followers, which today total over 3,000. “We have slowly been introducing the world to who we are. We celebrate when dispatchers have good moments, and we share information on serious topics, like suicide in young adults that is skyrocketing, especially in Las Vegas.”

Matt is also using his voice offline and outside the communications center to share matters most important to him and his team. One way is through his post as First Vice President of the Nevada APCO Chapter. “We need to modernize our 9-1-1 systems across the state, so we are working hard with legislators to bring funding to these efforts. We have the most advanced hotels in the state, and citizens need to experience the same with our public safety systems.”

Another way is through the work representing the Denise Amber Lee Foundation. With the foundation, Matt travels and teaches classes that demonstrate how 9-1-1 telecommunicators always strive for excellence. “I get to share our Las Vegas shooting story from the perspective of the dispatcher. People rarely hear from us, and it’s important we get our message out and help others understand the important work telecommunicators do.”