The List Grew Longer That Day, And We Are Better For It Today 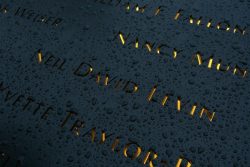 When Stephen woke that morning, he had only one thing on his mind, golfing with his three older brothers. It would have been the perfect foursome on a perfect September day across the river from Staten Island in New Jersey. Like most golfers balancing the love and commitments of family with a busy work schedule, Stephen relished what would surely be an incredible day. Yet, on his way to meet his brothers, Stephen heard the news about what was going on in Lower Manhattan. What he would do next would forever etch his name among the list of true American heroes.

Today is September 11…It is nineteen years since Stephen Siller, a New York City firefighter, upon hearing the news of the unfolding events taking place at the World Trade Center decided to postpone his golf outing with his brothers and join his company, Squad 1. Dealing with the massive traffic congestion that was growing in Manhattan and surrounding areas, he instead chose to run through the Brooklyn-Battery tunnel and race toward the towers to assist in battling the infernos that were enveloping the buildings. With his turn out gear in hand he made the journey mostly on foot. By day’s end, it was learned that Stephen, along with 10 other firefighters from Squad 1, perished in the inferno. He left behind a wife and five young children, but today his legacy serves as the cornerstone for one of the greatest philanthropic efforts in place to honor our military and first responders who continue to sacrifice life and limb through the Tunnel to Towers foundation.

Officer Moira Reddy-Smith was a thirteen year veteran of the New York City Police Department when she was killed on September 11. Officer Reddy-Smith was assigned to the Thirteenth Precinct when the planes struck the World Trade Center. She immediately responded and entered the towers to begin assisting with the evacuation. I often find myself returning to that iconic photo available online of Moira rendering aid to an injured man wondering what she was thinking. Without regard for herself, she continued to assist with the evacuation and it can only be imagined how many people she aided during that tumultuous time. She was last seen heading back into the South Tower before its subsequent collapse. The only female officer killed on September 11, she was survived by her husband and infant daughter. Moira’s name was another one etched on that list of American Heroes that day.

When United Airlines Flight 93 departed the gate at Newark Airport, it immediately found itself caught in the rut of the New York Metro area’s heavy morning air traffic congestion. The bottlenecks resulted in Flight 93’s take-off time being delayed by close to 40 minutes. This delay was not something the al-Qaeda terrorists had planned on. Their plan was to essentially synchronize hi-jackings to increase the surprise to the United States. What else the terrorists did not count on was the bravery of the folks on Flight 93 that day. Because the plane was delayed, once it was taken over and the passengers made contact with their loved ones via the airphones, they immediately knew they were now part of a grander suicide bomber mission. What came next has made history. Passengers from diverse backgrounds and unknown to one another banded together to do the unthinkable: take back a hijacked airline. Facing certain death, the passengers fought back to take control of the plane ultimately prevented it from striking its intended target in Washington, D.C. Flight recording transmissions reveal the harrowing scene in the cockpit area of the plane, and the courage exhibited by the passengers in the face of overwhelming odds. The list of heroes grew longer that day.

Just hearing the mention of the date “September 11” will forever evoke emotions in me no matter how much time has passed. The sights, the sounds, and the smells of that fateful day are as clear for me now as there were then. Like so many people who lived or worked in close proximity to Lower Manhattan, Washington, DC, or a field in Shanksville, Pennsylvania, the tragedy and devastation that was carried by terrorists touched all of our senses. Yet, one thing I would never have expected with the passing of time was how the importance of the stories from “9/11”, like the ones mentioned above illuminating the bravery of everyday men and women who did things on that day that were incredibly exceptional and extraordinary, would be needed now more than ever to help us navigate the challenges of today.

The battle between right and wrong, good and evil are timeless and will always challenge our sensibilities regardless of how the human experience evolves. Mythological figures of yesteryear helped ancient people understand the challenges they would endure in their lives. Today, we need heroes to model as we confront the challenges that lie ahead as society evolves. The heroes of September 11 remind us all in public safety that when faced with uncertainty and against all odds the human condition can prevail. We can never forget the heroes of September 11. They instill upon us a definitive understanding that selflessness, serving others and defending freedoms are core to advancing our democratic ideals and will always require sacrifice.

Today, I will be spending time thinking of that historic day. I will be thinking of those who paid the ultimate sacrifice as victims and as defenders. I will be reflecting with humility and gratitude, that in addition to the many public servants that day, there were so many regular people with regular jobs – people who never signed on to catch a criminal or fight a fire or render aid – who earned the right to have their names added to that long list of heroes.  I will be thinking of how public safety changed for the better because of the lessons learned. I will visit a memorial. I will participate in a memorial run, albeit virtually. I will do it all because, like you, I will better served for recalling the sacrifices made by many not just in memoriam, but so I can pay it forward in the future should the circumstances arise. Please do the same…lest we forget!